The Conservatives have their balanced budget — barely.

to a surplus in 2015 with a federal budget that has the government spending $1.4 billion less than it takes in — despite a spate of pre-election tax cuts announced last fall.

But the slim surpluses for this year and the next three years were bolstered by setting aside a smaller contingency fund than they planned just a few months ago in the fall economic update, as well as sales of some assets. Savings from public sector negotiations that haven’t yet taken place also helped put the budget barely into the black.

Without shrinking those rainy day funds, the Conservatives would still be in deficit for 2015-16 and would be projecting a $0.9 billion surplus in 2016-17.

It’s also clear how fragile the surplus is: a one-year, one percentage point decrease in the expected two per cent growth rate would drop the federal government back into deficit.

Oliver, however still found room for targeted tax measures to dress up a budget his party will take into the next election:

“Canadians need a break. Their expenses are significant,” Oliver told reporters during a press conference Tuesday. “It’s important for us to make life as affordable as we can.”

A whole volley of questions could be asked about possible changes to the government’s $291 billion in revenue or approximately $289 billion in spending, Oliver said. But the one important fact is irrefutable:

“Our revenue will be greater than our expenses. That’s how a balanced budget works,” he said.

The NDP and Liberals criticized the government for moving ahead with income-splitting for two-parent families, which is most beneficial to families with a single high income. They also took aim at the increase in contribution room for tax-free savings accounts to $10,000. 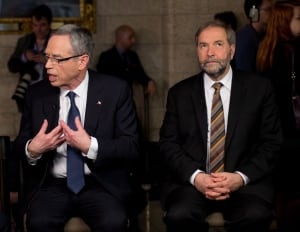 Finance Minister Joe Oliver, left, and NDP Leader Tom Mulcair take part in TV interviews after the federal budget was tabled in the House of Commons on Parliament Hill in Ottawa on Tuesday. (Adrian Wyld/Canadian Press)

NDP Leader Tom Mulcair said Prime Minister Stephen Harper is “stubbornly clinging to his view” that the best thing to do for society is help the wealthiest.

“He wants to increase the tax-free savings account, which is very nice if you have $60,000 in your back pocket,” Mulcair said.

Liberal Leader Justin Trudeau said his party would reverse the TFSA increase if it were in government.

“The TFSA itself, up to $5,000, is an encouragement to people to save and there’s a lot of Canadians who do that,” Trudeau said.

“But the reality is there’s not a lot of people who at the end of the year have $10,000 laying around that they can invest.”

The smaller contingency fund also raised Mulcair’s hackles. He accused the Conservatives of abusing it to show a balanced budget in an election year.

“I think that’s probably the contingency they’re worried about … the election.”

The government further massaged its bottom line with a promise to cut public service disability and sick leave, a pledge based on negotiations yet to take place. The budget projects the government will save $900 million in the current fiscal year due to “ensuring a healthier and more productive public service.”

Joe Oliver, after a weeks-long delay brought on by falling oil prices and a sagging economy, has tabled his first budget as finance minister. It’s a budget his party will take into this fall’s federal election. (Adrian Wyld/Canadian Press)

Some of the programs were announced in previous budgets and are being re-announced. A series of  measures for veterans falls into that category.

The budget also includes money for national security and defence, including $360 million this year for the fight against the Islamic State in Iraq and Syria (ISIS). Canada has committed to a renewed six-month combat mission in Iraq and Syria, which is set to expire in the fall.

Selfadvocatenet.com We would like to send our support and condolences to the victims of Nepal earthquake.

Stories are what we have incommon